Orestis Alexiadis was born and raised in Athens. He studied archaelogy and history of art at the faculty of Philosophy of the University of Athens. He began to take an interest in music, painting and athletics from a young age. Ηe plays percussion instruments and he is interested in photography.

Following his impulse, he became familiar with dance and the performing arts for the first time in 2017, by attending an intensive dance and improvisation seminar at I & R Duncan Dance Center, next to his mentors Timos Zehas, Tatiana Loverdou, Markella Manoliadi and Laura Rae Bernasconi. This experience served as a springboard for him and decided to follow contemporary dance lessons using the Axis Syllabus System, and yoga, while at the same time he met Nikos Photiadis who introduced him to the art of Capoeira.

As a perfomer, he took part in “Handmade”, a dance-theatre performance by Vicky Vassilopoulou, this work is the result of a seven month movement research. The performance was staged in the embassy of Cyprus in Athens. He cooperated with Tatiana Ligari in the framework of the 3d contemporary dance festival “Compartments Dance Project” at the Train in Rouf (an area in the outskirts of Athens). He also worked with Vicky Philippa in “Intersection”, a duet inspired by the japanese performance art «butoh» and staged in Switzerland, March 2019.

Always pushing his physical and mental limits, he daily attends classes in contemporary dance, improvisation, butoh and capoeira, instructed by prominent teachers that come from various fields in the performing arts. In this way, he explores a wide spectrum of the potential behind movement and body expression.

Orestis, as a dancer, improviser and acrobat, focuses on a variety of expression and movement forms, aiming at potentially creating his own movement repertoire, drawing from all possible sources of inspiration. Combatting,animal and spontaneous movements, distortions of form, angularities and flowing movements, plasticity, flexibility, speed, resiliency, acrobatics. All these elements are at work in the quest of an inner truth, like using the right tools to minutely, carefully and respectfully unearth a precious finding and delivering it to light. 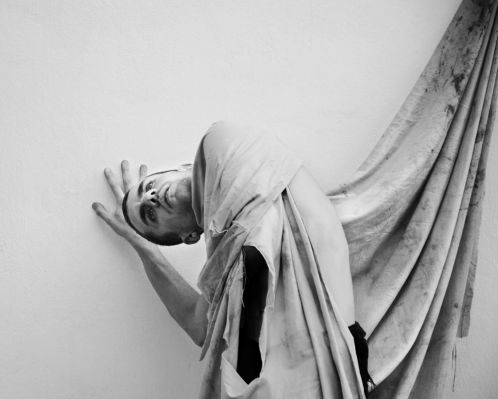